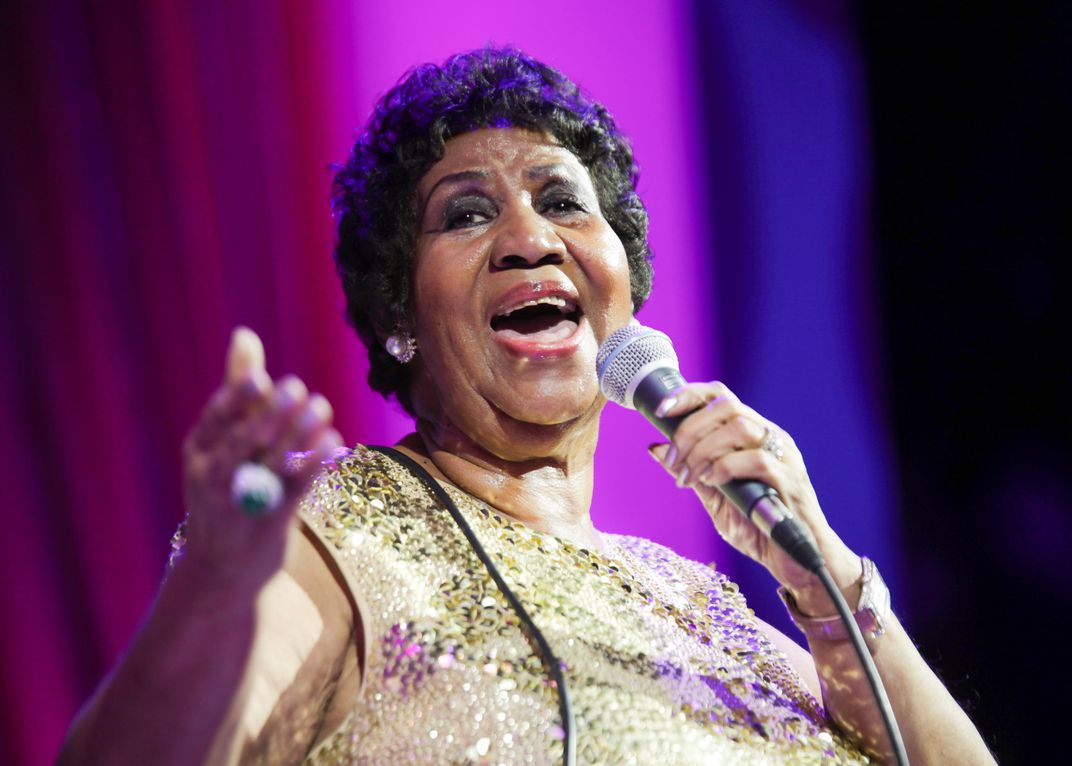 Aretha Louise Franklin (March 25, 1942 – August 16, 2018) was an American singer, songwriter, pianist, and civil rights activist.[2] Franklin began her career as a child singing gospel at New Bethel Baptist Church in Detroit, Michigan, where her father C. L. Franklin was minister. At the age of 18, she embarked on a secular musical career as a recording artist for Columbia Records. While Franklin’s career did not immediately flourish, she found acclaim and commercial success after signing with Atlantic Records in 1966. Hit songs such as “Respect“, “Chain of Fools“, “Think“, “(You Make Me Feel Like) A Natural Woman“, “I Never Loved a Man (The Way I Love You)“, and “I Say a Little Prayer“, propelled her past her musical peers. By the end of the 1960s, Aretha Franklin had come to be known as “The Queen of Soul“.

Franklin continued to record acclaimed albums such as I Never Loved a Man the Way I Love You (1967), Lady Soul (1968), Spirit in the Dark (1970), Young, Gifted and Black (1972), Amazing Grace (1972), and Sparkle (1976) before experiencing problems with her record company. Franklin left Atlantic in 1979 and signed with Arista Records. She appeared in the 1980 film The Blues Brothers before releasing the successful albums Jump to It (1982), Who’s Zoomin’ Who? (1985), and Aretha (1986) on the Arista label. In 1998, Franklin returned to the Top 40 with the Lauryn Hill-produced song “A Rose Is Still a Rose“; later, she released an album of the same name which was certified gold. That same year, Franklin earned international acclaim for her performance of “Nessun dorma” at the Grammy Awards; she filled in at the last minute for Luciano Pavarotti, who canceled his appearance after the show had already begun.[3][4] In a widely noted performance, she paid tribute to 2015 honoree Carole King by singing “(You Make Me Feel Like) A Natural Woman” at the Kennedy Center Honors.

Franklin recorded 112 charted singles on Billboard, including 77 Hot 100 entries, 17 top-ten pop singles, 100 R&B entries, and 20 number-one R&B singles. She is the most charted female artist in history. Franklin’s well-known hits include “Rock Steady“, “Call Me“, “Ain’t No Way“, “Don’t Play That Song (You Lied)“, “Spanish Harlem“, “Day Dreaming“, “Until You Come Back to Me (That’s What I’m Gonna Do)“, “Something He Can Feel“, “Jump to It“, “Freeway of Love“, “Who’s Zoomin’ Who“, and “I Knew You Were Waiting (For Me)” (a duet with George Michael). She won 18 Grammy Awards,[5] including the first eight awards given for Best Female R&B Vocal Performance (1968–1975). Franklin is one of the best-selling music artists of all time, having sold more than 75 million records worldwide.[6]

Franklin received numerous honors throughout her career. She was awarded the National Medal of Arts and the Presidential Medal of Freedom. In 1987, she became the first female performer to be inducted into the Rock and Roll Hall of Fame. She also was inducted into the UK Music Hall of Fame in 2005 and into the Gospel Music Hall of Fame in 2012.[7] In 2010, Rolling Stone magazine ranked her number one on its list of the “100 Greatest Singers of All Time”[8] and number nine on its list of “100 Greatest Artists of All Time”.[9] The Pulitzer Prize jury in 2019 awarded Franklin a posthumous special citation “for her indelible contribution to American music and culture for more than five decades.”

Aretha Franklin “Giving Him Something He Can Feel” LIVE 1976